Well, well, well… it’s been a busy couple of weeks. My poor little poorly baby was struck down with an evil ear infection, which resulted in both ear drums being perforated! (Ouch) Not content with that, he then fancied a quick trip to A&E after having an asthma attack! A full recovery has been made now though and he’s taken to appearing in doorways, scaring the crap out me! 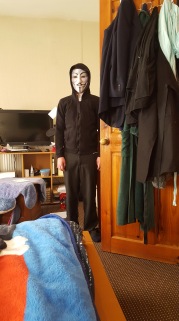 Here he is all ready for Halloween!

I’ve felt mentally rejuvenated this last week or so, I’ve felt as though things are getting done, everything is getting on the right track to somewhere. I’m ready to take on the world…or maybe just a small country, or I could just start with the laundry room, which we have started to decorate. yes I know, it’s quite unbelievable but I have photographic evidence. 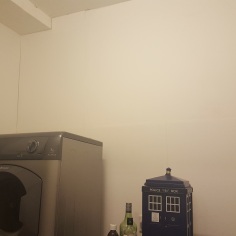 There shall be painting galore at the weekend! We also started stripping the doors, then realised that the seven layers of paint was going to take the rest of our lives to remove, so we gave up and just threw the door out. Chris has had his first lesson in reconnecting alarm wires, I apologise to our neighbours for the constant siren that has been emanating from our house for the last few days. You see the wire sticking out of the hole in he wall in the middle picture? Well Chris and I thought it was the phone line, no harm in cutting through that, we don’t have a landline, we don’t intend on getting one in the future…

This was followed by frantic searching for  the welcome pack from when we first moved in a year ago, to look for the alarm manual that informs stupid people of what to do when they inadvertently cut through the anti-tamper wire… It was a learning curve. It’s all fine, reconnected and not going off every time you slightly brush past the cable. We did learn that from now on electrical things will be handled by my Dad 🙂

All is not lost on us though! We have grown things, there is Parsley growing in my cute little kitchen window tub. (We also now have Basil but it sneaked up on me and I haven’t got a picture of it yet). 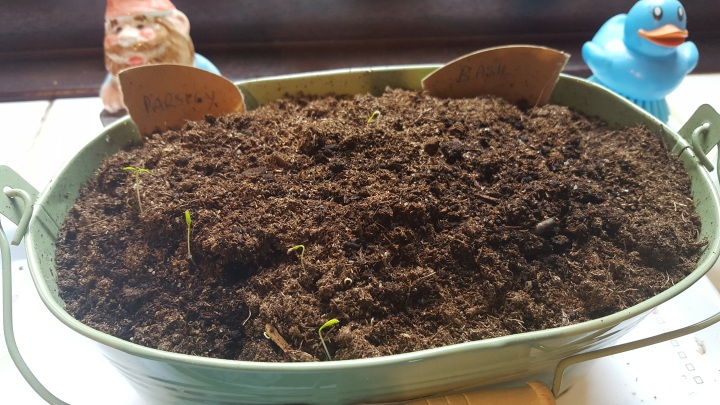 It was only fair that after our noisy, stressful Saturday of blaring alarms, running out of lining paper halfway through the job and coming to the conclusion that we can never have patterned wallpaper, we needed a relaxing Sunday. Our wallpapering technique was worthy of being nominated for precision awards…at least it was at first. The accuracy of measurements that went in to the first few strips was exceptional, so professional. By 8pm we had well and truly given up.

“Yeah, whatever, that’ll do, just stick it on the wall, we’ll cut it to size when it’s on”

So after our hard graft we deserved our delicious Sunday Birthday Lunch courtesy of my Mummy. She is awesome, the weekend was awesome. It’s been a productive one, with, hopefully another one to follow this weekend! 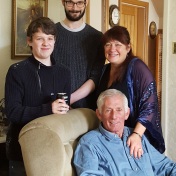 Google wished me a Happy Birthday! I got Ghostbusters, and HP Pj’s for my birthday, what more could I possibly need?!